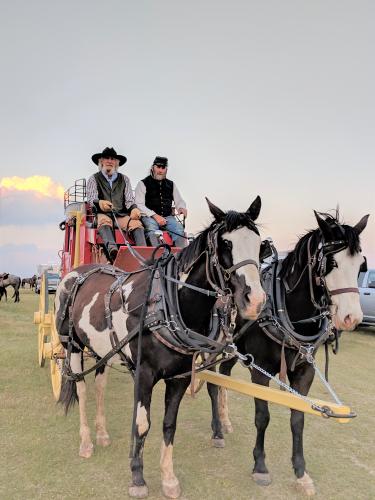 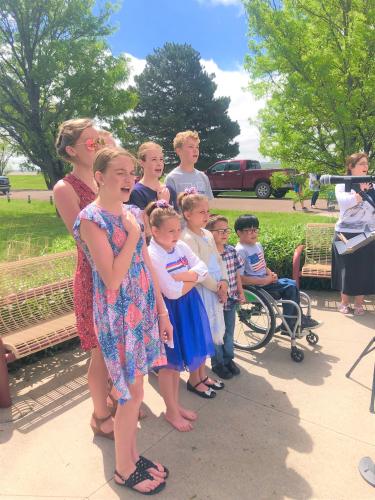 Another Fort Wallace Rodeo is in the books! We had a very large crowd on Saturday, as well as a full slate of contestants for every event. A special dedication was held at the beginning of the rodeo honoring long-time Memorial Association member Ernie Poe, featuring Ernie’s riderless horse and saddle led by grandson Eric Poe. Old West flavor was added to the mix with soldier re-enactors JD Perry and Dr. Jake Bauer who accompanied Old Glory into the arena for the National Anthem; it is always a thrill to have Skye Howard carry her grandfather’s casket flag by horseback into the arena for opening ceremonies. Spectators were also treated to the sight of the Museum’s bright red BOD stagecoach, which made its maiden voyage being pulled! This beautiful coach is a poplular attraction inside the Museum and was pulled by Jason Bussen’s paint team and driven by JD Perry.

For the Sunday afternoon performances, Mother Nature was not nearly as kind, but the Rodeo soldiered on despite rain, hail and wind! Thanks go to the Connie, Deone, Dale, Cauy and Jill Hudson for helping to again the produce the Fort Wallace Rodeo, as well as the other rodeo contractors, sponsors and contestants from Kansas, Colorado, Nebraska and Oklahoma. We again thank the Dane G. Hansen Foundation and the Wallace County Foundation, as we enjoyed the over $25,000 worth of improvements to the rodeo grounds, including new bucking chutes, a new water line, 2 new sets of bleachers and announcer booth renovations.

On Monday, our Community managed to hold its annual Memorial Day observances, in spite of muddy roads leading into the Wallace Cemetery. The ceremony was held on the front plaza of the Fort Wallace Museum, with a flag-raising by Boy Scout Troop 145, the National Anthem led by the Chisum grandchildren and violin music by Chisum and Ellie Goodwin, as well as Kendra Akers. Remarks were offered by Wallace Mayor Lyle Hammer and Kansas State Representative Adam Smith. Virgie Popp offered a reading, and Lynn Kirkham led the final prayer. Rita Kirkham opened the ceremony with a short history of the Busy Bee Club, who sponsors the annual event. Jayne and Cecil Pearce sang the traditional “God Bless the USA” and Janahea Dinkel closed the ceremony with a well-played rendition of “Taps.” The names of veterans buried in the Wallace Cemetery were read by Sherrel Harrison and flags were handed out by Patty Lou Lock, received in part by Scouts and Smith family children. The flags were planted for the day on the front lawn of the Museum. The nearly 100 attendees enjoyed visiting with each other following the ceremony, with many touring the Museum and stopping by the new Memory Bank and Wallace Trading Company in downtown Wallace.