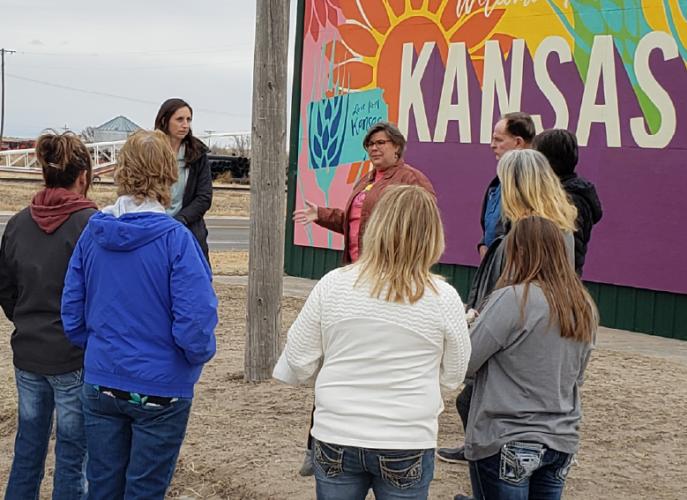 In June, Governor Laura Kelly announced that 14 communities were to receive funding through the Office of Rural Prosperity’s Rural Mural and Public Art grant program. The $93,500 in grants enables communities with fewer than 10,000 residents to create new murals and public art projects beautifying community gathering spaces and serving as new tourist attractions.
The projects require a 1:1 match from the community. Seventy-five percent of the grant funding was gifted up front as several city projects started immediately.
“Rural Kansas has the opportunity to be a more popular tourist destination, which will promote economic growth in the smallest of Kansas communities,” said Lieutenant Governor and Commerce Secretary David Toland. “The development of high-quality destinations and improved infrastructure across the state will make these featured attractions more valuable and easier to reach than ever before.”
Wallace County Foundation received a grant of $7,750 from these funds, which they matched per the requirements.  These funds were divided among all three Wallace County communities to fund murals. Haylee Hennick painted a mural depicting Wallace in the 1970s.  Raya Wagoner painted a floral mural on the north and east sides of her salon at the corner of 3rd and Main in Sharon Springs, and Lissa Sexson painted a mural welcoming travelers to Kansas in Weskan.
On Wednesday, December 28th, the murals were officially “unveiled” in an event that kicked off in Weskan.  Sexson gave a brief speech about how the project came about and fielded questions including what kind of paint was used to seal the artwork to protect it from the harsh Kansas weather.
The attendees then traveled to Sharon Springs to take in the beauty of the floral mural at Raya’s Salon.  Wagoner took a moment to explain that she chose to paint a mural featuring poppies, sharing that poppies were the first flowers she saw when she first visited the home of her future in-laws, Verlan and Rhonda Wagoner.
Once again, the attendees loaded up in their cars, this time to travel to the mural in Wallace.  Hennick told the story of how she was approached to paint the mural, how the design idea for the mural came about, and then explained that she traveled home from college every weekend to work on the mural.  It is a beautiful depiction of life in Wallace on the east side of the old post office. Just outside of the hotel, a woman with tied-back hair, donning an apron, stands, waiting for visitors to join her for a photo op, beside an oncoming train.
“Art, and murals, in particular, help bring communities together to celebrate the history, culture, and unique characteristics of their rural towns,” said the Director of the Office of Rural Prosperity Trisha Purdon. “The Rural Mural program helps these communities showcase those amazing characteristics to their current residents, visitors, and to the entire State of Kansas for generations to come.”