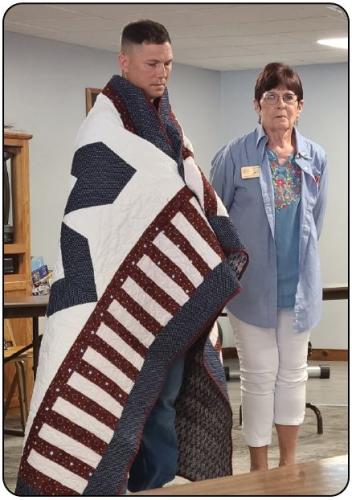 On August 7th, the Quilts of Valor organization honored Michael Chaney for his years of service.
Chaney enlisted in the Marine Corps in 1990.  He completed Basic Training in San Diego, Calif.  Chaney completed Infantry Training at Camp Pendleton, California before being assigned to serve in Hawai’i.
While in Hawai’i, Chaney was with Security Forces for 2 years then served with the Infantry Battalion until 1996.
In 1996, Chaney returned to Camp Pendleton where he was with the Marine Air Group until 1999.  At this point, he was assigned to Recruiting Duty in Salina and Hays, Kansas.
Chaney was selected for Warrant Officer Training in Quantico, Virginia before returning to Hawai’i with an Artillery Battalion where he served until 2004.  At that time, he returned to Camp Pendleton to serve with the Marine Expedition Unit.  Chaney served with this unit until 2007.  During this time, he was deployed to Iraq two times and spent some time aboard the naval ships USS Bon Homme Richard and the USS Boxer.  His main responsibilities included Nuclear, Biological, and Chemical Defense.
In 2007, Chaney returned to Quantico and served with Headquarters Marine Corps until 2012, when he began serving at the Pentagon with Joint Chiefs of Staff until his retirement in 2014.
Chaney retired with the rank of Chief Warrant Officer 5 and is most proud of the Humanitarian Missions he completed throughout the years, stating, “it was very rewarding to help.”
Thank you for your service!