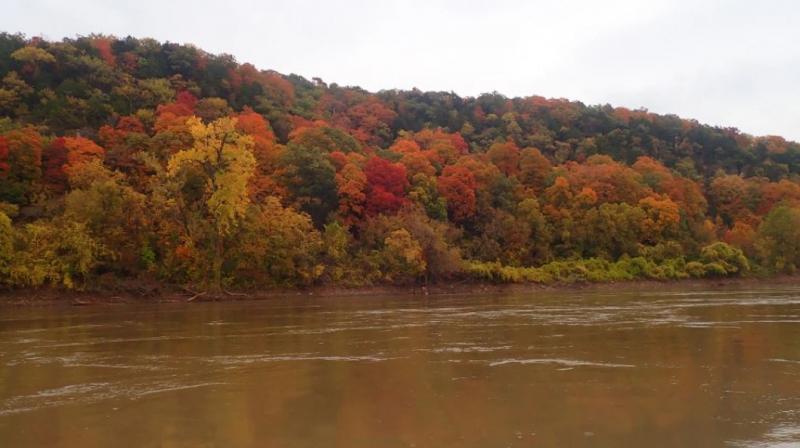 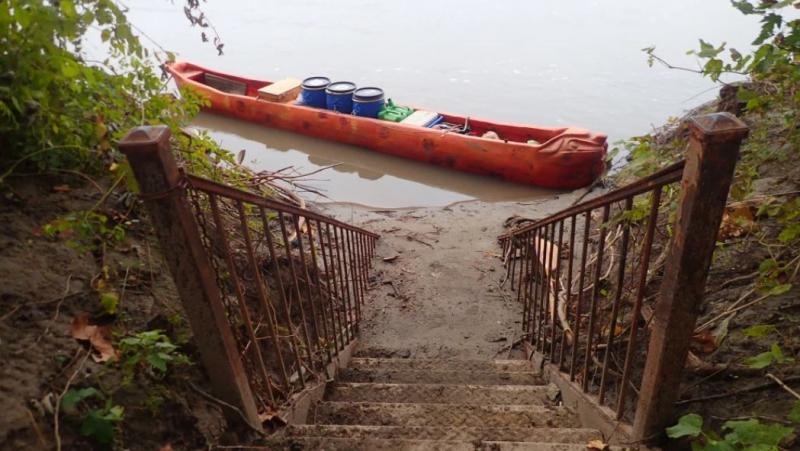 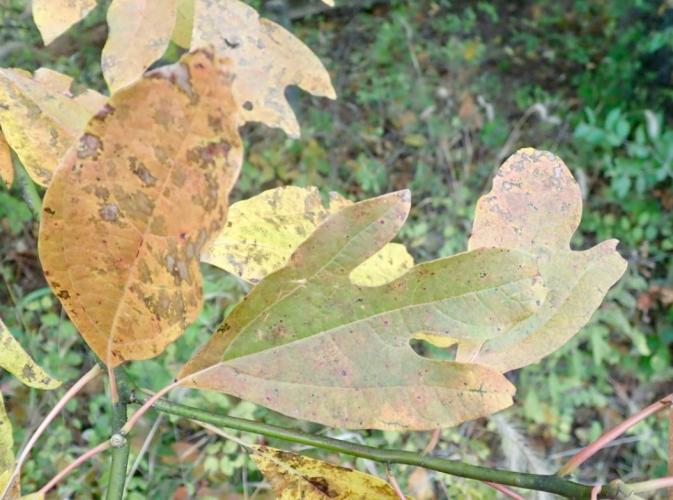 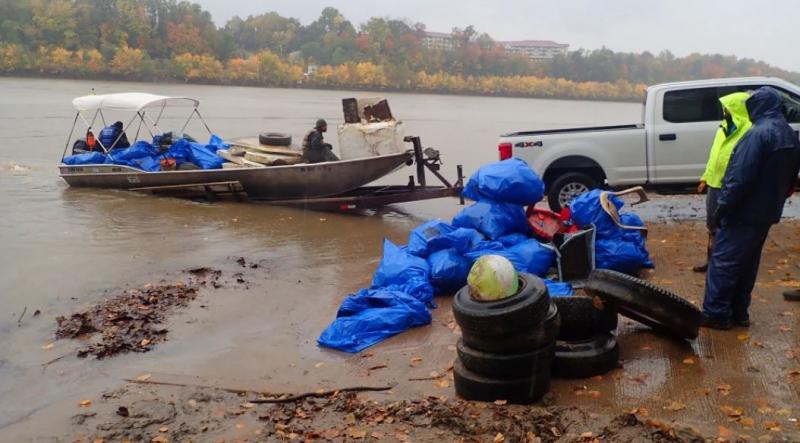 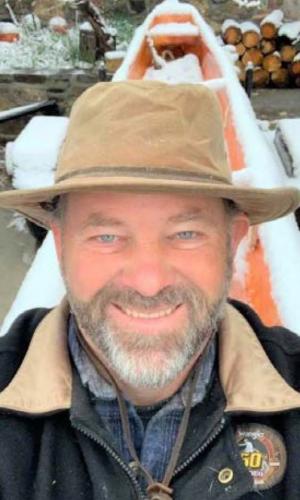 “At 8 ms. passed the mouth of a Creek Called Saline or Salt R on the L. Sd. this {Creek} River is about 30 yds. wide, and has So many Licks & Salt Springs on its banks that the Water of the Creek is Brackish, one Verry large Lick is 9 ms. up on the left Side    the water of the Spring in this Lick is Strong as one bushel of the water is said to make 7 lb. of good Salt.” - William Clark, June 6, 1804

Paddling the channelized Missouri River provided a leaf-by-leaf transition into fall colors, starting with isolated pockets of reds and yellows way back at Sioux City. The colors gradually increased downriver, then stalled and began rewinding towards summer greens as we raced southward. But the cold front that overtook us slowed our advance while accelerating the advance of changing colors. Our southern migration halted when the Missouri turned east at Kansas City, allowing fall colors to engulf us from the river banks.

Fall colors here are not like the brilliant carpet of gold I know at home, where uniform forests of cottonwoods turn bright yellow along the rivers. Colors here are more diverse, reflecting the diversity of trees, but also more muted, like the daubed brush strokes of an impressionist painting. A thousand shades of yellow, orange, and red mingle with a background of lingering green, subdued by intermingled grays and browns.

We were told the channelized river would be boring, “every curve the same” for 750 miles. But with the swift current and ever-changing leaves, we enjoyed front row seats to the best show on fall TV. The addition of limestone bluffs made this scrolling painting one of the most scenic parts of the Missouri River.

Downstream from Glasgow, we passed near Boone’s Lick State Historic Site, a mile northeast of the river.  The lower Missouri was already well known to settlers before William Clark noted the abundance of salt licks. Just one year later, Daniel Boone’s sons Nathan and Daniel Morgan Boone partnered with James and Jesse Morrison to commercialize the area’s largest salt spring.

Salt production was very labor-intensive prior to industrialization. At Boone’s Lick salt works, workers heated brine water in iron kettles to steam off the water, leaving crystallized salt behind. Cooking off 250 to 300 gallons of brine water produced one bushel of salt. The business grew to employ twenty men laboring over sixty kettles. They produced thirty bushels of salt per day, which was shipped downstream to St. Louis via keelboats and sold for $2.50 per bushel.

Saline seeps and falling leaves are not all that enters the river. A small trail of litter peppers the Missouri all the way from Montana, growing visibly worse below population centers such as Kansas City. I plucked a floating water bottle from the river, imported from Fiji, nearly 7,000 miles away, the non-degradable container now littering this beautiful river. Flood waters exacerbated the trash problem, picking up random goods and trash from every private and public parcel along the way.

Continued paddling brought us to Wilson’s Serenity Point opposite Jefferson City, the capitol of Missouri. Here we connected with Missouri River Relief, the premier nonprofit organization working to benefit our nation’s longest river. MRR offers river ecology classes to students and teachers and hosts three or four major river clean-up days each year. Here they worked with 200 dedicated volunteers to spend the morning collecting trash from ten miles of riverbank on the east side of the river.

Rain was settling in when we arrived, dispersing most of the volunteers. We joined the remaining crew to sort recyclables from trash. The clean-up gathered 254 bags of trash, plus boatloads of beadboard insulation, 41 tires, a chemical tank, and a whole slew of propane tanks, hot water heaters, mini-refrigerators, chest freezers, and coolers. Crews found not just one message in a bottle, but ten of them over the ten-mile clean up. The waste more than filled the rented construction dumpster, the excess bags stacked until an additional dumpster arrived.

My impression from nearly five months of paddling is that far more trash enters the river than is readily visible along the banks. There is likely a steady stream of garbage tumbling along the river bottom to the Mississippi and down to the Gulf of Mexico. It is estimated that 40 percent of the trash in the Gulf comes down the Missouri and Mississippi rivers.

We unintentionally contributed litter through 2,000 miles of paddling, leaving behind a small trail of missed hats, sunglasses, lids, silverware, and even a fishing pole that disappeared over the side of a canoe. However, we more than offset our footprint by picking up trash, occasionally finding useful gear along the way, such as sunglasses and a fishing net.

Solving the litter problem requires a complex, multi-faceted approach that addresses everything from disposable containers to new setbacks along flood-prone waterways. But that isn’t an excuse for individual apathy. There wouldn’t be a litter problem if each person simply picked up more garbage than they dropped. It is easy to blame the schmucks who litter. Yet, equally to blame are those who dismiss litter as someone else’s responsibility or beneath their dignity to clean up. The world’s problems are immense, yet readily manageable if each person contributes to the extent readily within their means to do so.

From Serenity Point I enjoyed a walk across the bridge to visit Lewis and Clark Trailhead Plaza near the capitol building. We camped overnight with the Relief crew, enjoying the warmth of good company and a hardwood fire to dry our damp clothes even during continued sprinkles.

Thomas J. Elpel lives in Pony, Montana. The full story of the Missouri River expedition, along with hundreds of photos, will be published as “Five Months on the Missouri River: Paddling a Dugout Canoe,” available in March.

Top photo - Fall colors are rich and varied, dabued onto the landscape like an impressionist painting. 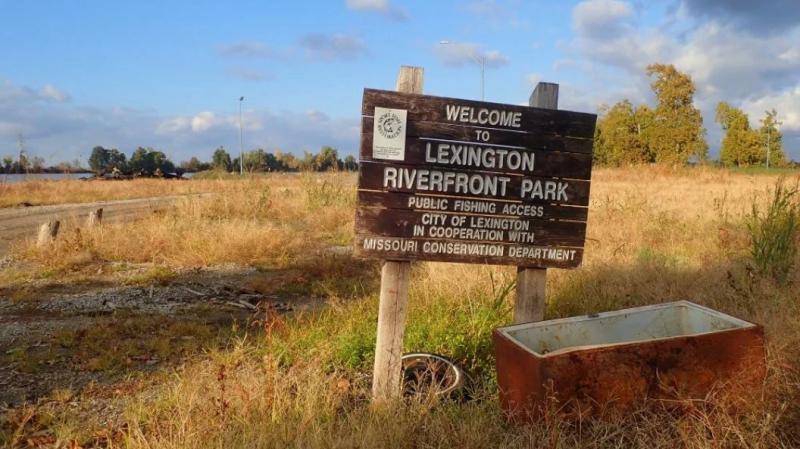 “Set out after a heavy Shower of rain and proceeded on the Same Course of last night    passed a large butifull Prarie on the S. S. opposit a large Island, Calld Saukee Prarie, a gentle breese from the S. W. Some butiful high lands on the L. S.    passed... [More] 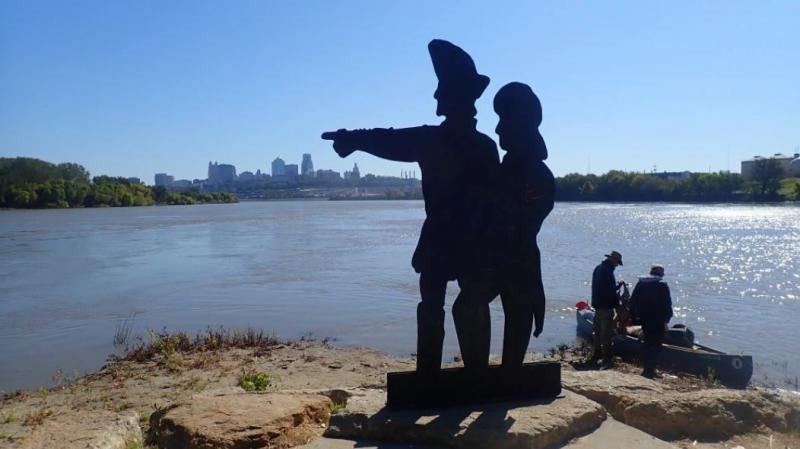 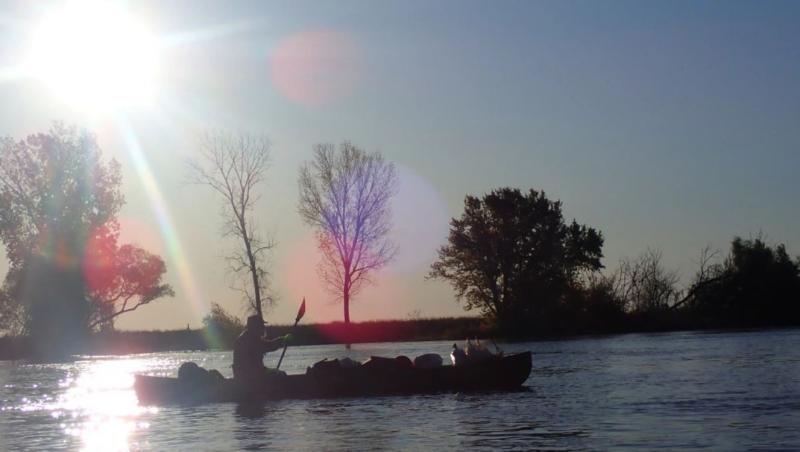 “A verry warm day (worthy of remark that the water of this river or Some other Cause, I think that the most Probable throws out a greater preposn. of Swet than I could Suppose Could pass thro: the humane body    Those men that do not work at all will wet a Shirt... [More] 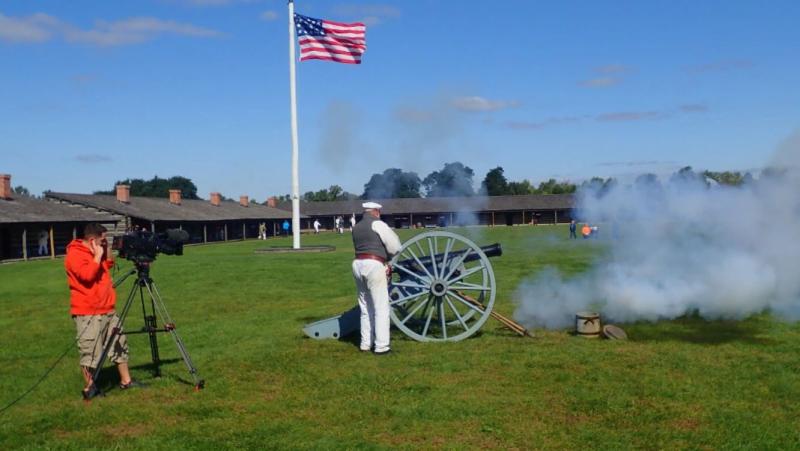 “The Situation of our last Camp Councill Bluff or Handssom Prarie appears to be a verry proper place for a Tradeing establishment & fortification    The Soil of the Bluff well adapted for Brick, Great deel of timbers above in the two Points.    many... [More] 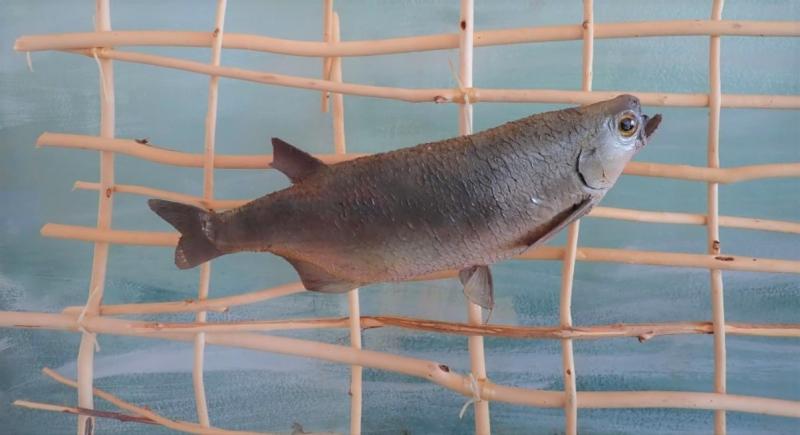 “I went with ten men to a Creek Damed by the Beavers about half way to the Village, with Some Small willow & Bark we mad a Drag and haulted up the Creek, and Cought 318 fish of different kind i’e’ Peke, Bass, Salmon, perch, red horse, Small Cat, and a kind... [More] 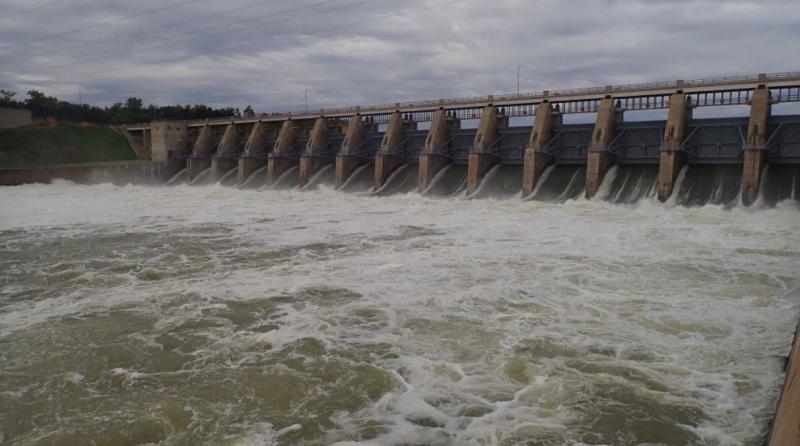 “We Came to [to] make a warm bath for Sergt. Floyd hopeing it would brace him a little, before we could get him in to this bath he expired, with a great deel of composure, haveing Said to me before his death that he was going away and wished me to write a letter— ... [More] 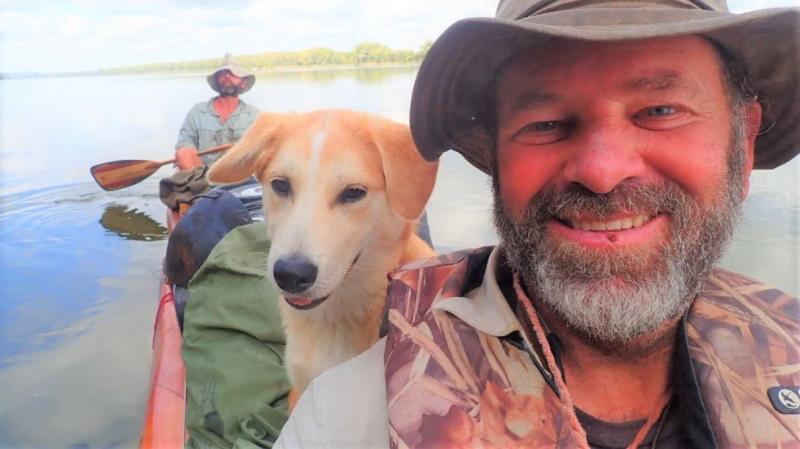 “Passed the mouth of the River Que Courre (rapid R[)] on the L. S. and Came to a Short distance above, this River is 152 yards wide at the mouth & 4 feet Deep Throwing out Sands like the Platt (only Corser) forming bars in its mouth, I went up this river three miles... [More] 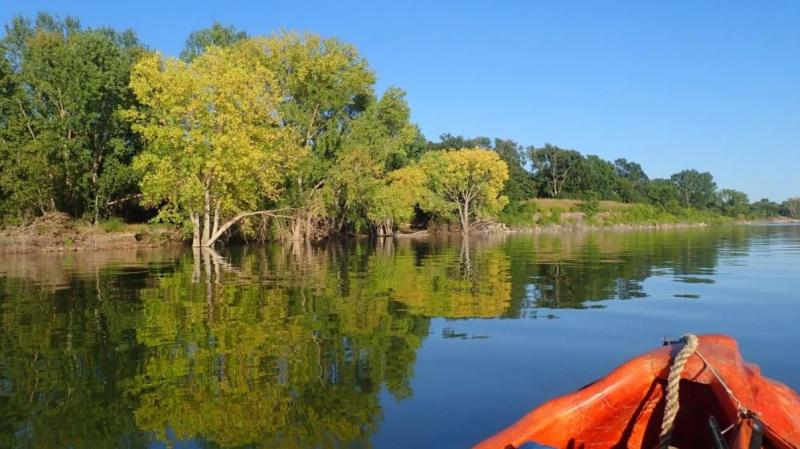 “George Shannon who had been absent with the horse es 16 days joined the boat about one oclock.  he informed us that the reason of his keeping on so long was that he see some tracks which must have been Indians.    he to[ok] it to [be] us and kept on, his... [More]